Today we’re going to talk about Baroque period music. We’ve talked about this subject a fair amount so far – we did a video on Baroque keyboard music, and also some styles popular in this era, like binary form and the minuet.

I like spending a fair amount of time discussing the baroque period, since it’s one we tend not to understand instinctively. Everyone can get behind Chopin – his music, in its expressiveness, sounds almost modern. But Baroque music is completely different from anything modern, so it’s often more difficult to get into.

It reminds me of food. Generally, unless you’re really into food and/or cooking, you’re not going to like anything different from what you know. If you grew up with Canadian food where the only spice ever used was black pepper, it can be challenging to get into spicy curries. But it can be done, with frequent exposure and an open mind.

See, once something is no longer unfamiliar, that’s when it becomes tasty, and interesting, and something you reach for.

The same is true of Baroque period music.

I could do hours of videos on this topic, but I’ve decided to simply do two videos (for now). After this set of videos, we’ll take another look at some more Baroque music tutorials for beginning grade students. Even if you’ve been playing for years, Baroque music is frequently neglected and it might be helpful to go back to basics.

There is so much more to Baroque period music than what was done on the keyboard, so I’ll touch on other instruments as well – but as always, we’ll keep the focus fairly keyboard-centric here at PianoTV.

In the first video, we’ll talk about what and when the Baroque era was, and what crazy things happened in music in that era. We’ll also talk about an influential power-group called the Florentine Camerata and the development of opera.

In the second part, we’ll look at Baroque innovations and developments, such as tonality, counterpoint and instrumental music.

My goal is to give you a more well-rounded understanding of the era, and why you should care as a piano player.

So let’s get into it!

First things first – let’s get our facts straight. In order to understand the musical landscape during the Baroque period, we need to have a basic understanding of what was going on in the Western world.

The Baroque period refers roughly to a period between 1600-1750. Before the Baroque period we had the Renaissance – you know the one – the age of enlightenment and Shakespeare and all that.

Science was becoming more and more important – the Baroque period was in the thick of the scientific revolution, with Galileo and his telescope, and Newton and his gravity changing the way we would perceive the world forever.

There was also plenty of war and unrest. There was the English Civil War, the Fronde in France, and the pinnacle of the 30-year war between Protestants and the Catholics, as the Holy Roman Empire fractured. More wars took place around the world in the mid-17th century than in almost any other period of recorded history.

So in the 17th Century, we have a world changing. There was a movement from sacred to secular, from religion to science, from ambiguity to clarity.

In the Baroque era, music exploded.

One of the major Baroque period music innovations was modality shifting to tonality (more on that in the next video).

People also became interested in expressing emotions through music. For some composers, that meant stormy human emotions. For other composers, it meant expressing and honoring divinity through their compositions.

In the Baroque era, counterpoint was developed and perfected by Bach, but fell out of favor in the Classical era. Where Baroque music typically projected one mood for an entire piece, Classical music had much more variation within a piece.

Just think about the wild mood swings in a Beethoven Sonata versus the consistent, steady mood throughout a Bach prelude. 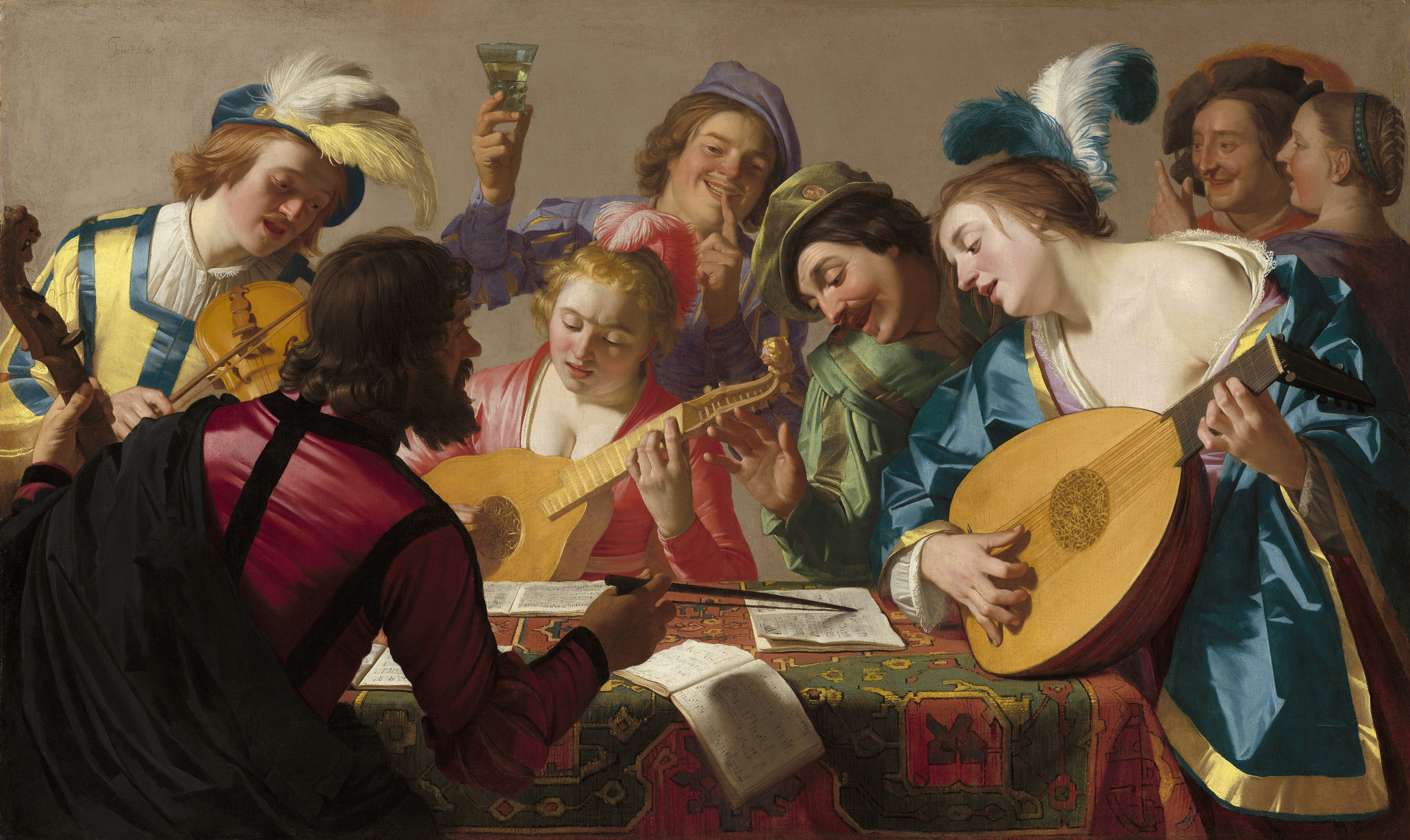 A discussion on Baroque music has to include the Florentine Camerata. You can think of them as a meetup group of artists and intellectuals, who came together in Florence, Italy at the tail end of the Renaissance, to have discussions and parties.

Only, this was no ordinary meetup group. This would be the modern-day equivalent of a celebrity get-together where they hung out at a rich patron’s house (Giovanni de’ Bardi), and invited all kinds of fabulous guests over.

You probably haven’t heard of many of the Camerata’s members, since most of us aren’t well-versed in Baroque music and history, but I’ll name a few. First, we have Galileo’s dad, Vincenzo Galilei. Giulio Romano was a musician who participated, and made huge innovations regarding opera. There was Girolamo Mei, who was really into reviving Greek Music Drama. There were quite a few others who I won’t name here, but this was a talented and relatively famous collection of people.

What the Florentine Camerata were really interested in was reviving the style of ancient Greek music. They believed that modern music had gone to the dogs, and it was up to them to save it. They also believed that by improving music, they could also improve society.

The awesome thing about this meetup group is that they didn’t just talk about revolutionizing music – they actually did it.  They developed a musical style called monody, a single voice heard over instrumentation, that was a direct contrast to the overly complex polyphony at the time.

From this, the first opera was born. A composer named Jacopo Peri teamed up with the poet Ottavio Rinuccini to create two operas called Dafne and L’Euridice, which would change history forever.

Other composers noted this change of musical direction and quickly jumped aboard, such as Claudio Monteverdi, a name you might have heard, with his opera L’Orfeo, which is still performed today.

Which brings us to a brief discussion on opera. Love it or hate it, opera was hugely innovative at the time.

Opera was born at the beginning of the Baroque era around 1600, and by 1640, opera was open to the public and performed in theatres. Serious and comedic forms emerged, with the comedic forms designed to be entertaining for the less cultured new wealthy. In serious operas, the singers were generally very virtuosic and became superstars. This was also in an age where male hero characters were performed by castratos.

Other notable composers of opera include Handel, who wrote serious operas for English audiences, such as Giulio Cesare, and Italian-born Scarlatti and Vivaldi.

Opera would be further refined and expanded upon in the Classical era by guys like Mozart, but like many other things in music and life, the Baroque era was where it all began.

Stay tuned for the next episode, part 2 of our Baroque Period Music discussion. This is intended to be a general overview for beginners (or beginners of music history). Perhaps if there’s interest in it, I’ll do more detailed and specific videos in the future.