Today’s video is going to be the top 5 Bach pieces in TV & movies. This is entirely based on my own opinion. I haven’t done a “top 5” or “top 10” before on this channel, but it sounded like fun so I wanted to give it a try.

We’ll count down from #5 to #1. All of the choices are not only awesome movies and shows, but they actually spotlight a Bach piece in some way. No quiet background music here!

Johann Sebastian Bach was a German composer in the Baroque era, meaning he was active in the early 1700s. I’m a big fan of learning Bach on piano – his music makes for great exercises and skill-building, and there’s a certain purity to it. My guess is that even if you think you don’t know any Bach music, you more than likely do – which this top 5 list will go to show.

Let’s jump right to it!

Starting off our list with #5 is from the TV show we all know, The Simpsons. The song in question? Jesu, Joy of Man’s Desiring, also known as “that one wedding song”.

Jesu, Joy of Man’s Desiring is a famous instrumental work by Bach that appears over and over in pop culture. To name a few, there’s Downton Abbey, 40 Year Old Virgin, Brooklyn Nine-Nine, and How I Met Your Mother. Pop culture aside, if you’ve been to lots of weddings, you’ve definitely heard this.

If you remember the episode of the Simpsons where Bart hooks up with the reverend’s daughter until he realizes she’s way more trouble than he is, then you’ll probably remember hearing this tune.

Number #4 is the first Godfather movie.

The Godfather movie (and the soundtrack) is clearly a classic, all the way from 1972. In this, we hear some terrifying organ music during the famous Baptism scene. It’s considered a pivotal scene, the climax of the movie, and I won’t spoil it for you here – watch the movie if you haven’t and enjoy some Bach.

An interesting note is that the writer wasn’t happy with the montage, that is, until Bach’s eerie organ composition was laid underneath it. That composition is called “Passacaglia and Fugue in C Minor”.

Even though the Godfather is such a classic, this one gets the #4 spot because the music isn’t spotlighted (though it’s pivotal to the mood), and it’s also not as familiar. 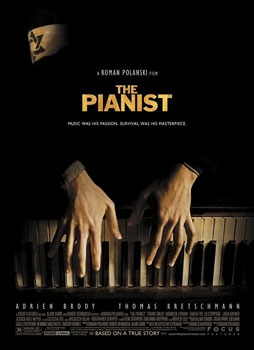 Next up is #3, from the movie The Pianist.

The Pianist (2002) is a great movie with a great soundtrack, especially if you’re a piano player. 80% of the movie – at least – is Chopin, but we are treated to other composers, such as Bach.

Here’s another piece you’ve surely heard, but maybe didn’t know the name of – Bach’s Cello Suite No. 1 in G Major, specifically the Prelude. It’s been in House, Smallville, and cell phone ringtones everywhere. Most of all, it was featured in the movie The Pianist.

Since this is such a famous movie, it hardly needs explanation, but the gist of it is this – a Polish/Jewish concert pianist struggles to survive World War II in Warsaw. In the movie, The Cello prelude is performed by Dorota, roughly in the middle of the movie.

My #2 selection is far more recent than the others, and chosen from the TV show Boardwalk Empire.

Everyone knows the tune of Bach’s Toccata and Fugue in D minor, but most of us don’t know the title. Most of us just know it as that super-creepy, Halloween-esque organ tune.

This creepy song has been used in everything from The Office and Spongebob, but today I’d like to look at its use in an episode of Boardwalk Empire.

In the episode titled “Home”, we meet a character named Richard, who in my opinion makes the show. He’s a disfigured ex-army man who also happens to be an excellent assassin. In this episode, we not only get to meet him, but witness his assassination skills, to which Bach’s Toccata in D minor plays boldly.

My number 1 choice comes from the great movie Mr. Holland’s Opus, for two reasons – it’s a great movie (which I just stated), and Bach’s piece is directly used as an example, instead of just being a nameless background tune.

This piece is his simple piano Minuet in G Major, BWV Anh. 114.

In the movie Mr. Holland’s Opus, Glenn, a high school music teacher, is having a hard time with his students. Eventually he decides to use music they love – rock and roll – and show them how it relates to classical music. He uses The Toys’ rock n’ roll “Lover’s Concerto” as an example that the class recognizes. Little do they know it’s a spin off Bach’s Minuet in G!

I hope you enjoyed this video on the top 5 Bach pieces in TV & movies. When I was researching this video, I discovered that nearly 1000 movies and TV have used Bach music! Which just goes to show that there’s a Bach for everyone. And, you probably know his music better than you think.