Hi and welcome to PianoTV!

Today we’re going to look at a traditional American folk song called “The Yellow Rose of Texas”. We’ll talk about the song’s dark past, its use in the military, and its modern re-makes a la Mitch Miller and Elvis Presley.

And, of course, you’ll learn how to play it on piano!

As always, the free sheet music that I arranged is linked to below.

I always like to start every song tutorial with a backstory, and this one is no exception. However, the backstory is a little sordid, so prepare yourself.

Let’s start with the basics. The Yellow Rose of Texas was famous in, you guessed it, Texas. It was first published in 1858. Texas, mid-1800s. A peaceful and happy place for all races.

But I’ll spare you the political commentary. The gist of the song is this:

Also the source of the Soldier’s affection, the “Yellow Rose” of Texas, refers to a girl. Not just any girl, but a “yellow girl”, apparently a girl of mixed race – who our protagonist was in love with.

Here is an excerpt of the lyrics from the original version:

There’s a yellow girl in Texas
That I’m going down to see;
No other darkies know her
No darkey, only me;
She cried so when I left her
That it like to broke my heart,
And if I only find her,
we never more will part.

She’s the sweetest girl of colour
That this darkey ever knew;
Her eyes are bright as diamonds,
And sparkle like the dew.
You may talk about your Dearest Mae,
And sing of Rosa Lee,
But the yellow Rose of Texas
Beats the belles of Tennessee .

Happily, 25 years later the lyrics swapped out “Darkey” with “Soldier”, so that’s a step in the right direction.

There’s a yellow rose in Texas, That I am going to see,
Nobody else could miss her, Not half as much as me.
She cried so when I left her It like to broke my heart,
And if I ever find her, We nevermore will part.

She’s the sweetest little rosebud That Texas ever knew,
Her eyes are bright as diamonds, They sparkle like the dew;
You may talk about your Clementine, And sing of Rosalee,
But the yellow rose of Texas Is the only girl for me.

An alternative ending verse was written during the Civil War by Texan soldiers:

And now I’m going southward, for my heart is full of woe,
I’m going back to Georgia, to find my Uncle Joe,
You may talk about your Beauregard, and sing of Bobby Lee,
But the gallant Hood of Texas played hell in Tennessee.

Why Learn The Yellow Rose of Texas? 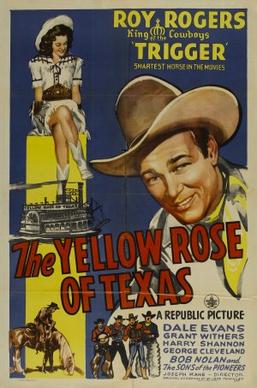 So why are we learning this song?

For a few reasons. Not every song has a bright and shiny past – in fact, many don’t. It would be silly to skip the darker tunes, because then we don’t end up with a well-rounded view on history.

Also, it’s a popular tune that most people know, and most people can play it on the piano in their first year of study. So I chose it out of function.

And even though the song might have originally had an iffy past, it doesn’t really have those associations anymore. The lyrics have been altered to be a love song with no racial biases. Except for maybe the title itself.

Versions of the Yellow Rose of Texas

To hear it on the keyboard, be sure to check out the PianoTV video at the beginning of this post.

There are two famous renditions of this song that we’ll look at: The Mitch Miller version which was a number 1 hit in 1955, and Elvis Presley’s version which is a bit different from the original.

In both versions you’ll hear the strong march-like beat, which we’ll discuss in a minute below. For now, you can just start to get the tune in your head.

In Elvis’s version, you can hear that it’s actually a medley (or mash-up) of The Yellow Rose of Texas and The Eyes of Texas.

The first thing I want to talk about is the song form. So far we’ve done Minuets and Waltzes, but The Yellow Rose of Texas doesn’t fit into either of those dance styles.

You might have already guessed it, but this tune is written as a march. Without getting too in-depth – we’ll dedicate a whole video to marches in the future – marches are generally around 120 BPM – which would be about the speed of a fast walk (which is basically what the word “march” means).

And as you probably noticed from the recording, marches have a strong rhythm, and are frequently performed by military bands (go figure).

One of the reasons this piano interpretation sounds so strong and rhythmic is due to the left hand accompaniment.

I could have just played regular, blocked chords, and it doesn’t sound bad, but we lose a lot of the energy.

If I tried playing it as broken chords, which we’ve done in songs like Greensleeves, it just sounds way to mellow and ballad-y.

So instead, I opted for another chord pattern, the Bottom-Tops. Silly name for a chord pattern, but it’s very descriptive. To play a Bottom-Top, you play the bottom note of the chord, followed by the top two. And that’s all she wrote.

Other basics on this page – what key is this song in?

Well, we have an F# in the key signature, so it could be in either one of two keys. It could either be in the key of G major, or it’s minor doppelganger, E minor.

By looking at the first chord (G major) and first right hand notes (D – C – B), it should be fairly obvious that this piece is in G major.

Also some difficult Italian here, our tempo marking “Moderato”. This goes back to when we were discussing marches a minute ago – they’re about the speed of a fast walk. So we use “Moderato”, or “Moderately”, not fast, “Allegro”.

Even though marching is a fast walk, I would liken “Allegro” more to a running speed. Think about horses. Allegro is like a gallop, Moderato would be like a canter.

Chords in The Yellow Rose of Texas

Let’s take a look at some of these chords here.

The chord pattern is VERY simple in this song – you simply alternate between a G major chord, to a simplified and inverted D7 chord. That’s it.

To get technical with you, I’m going to write out the letters of G major scale. G major chord would be the first chord of the scale, so we’ll mark that with the Roman numeral for 1.

Now let’s look and see where D7 chord falls. D is the 5th note of G major scale, so we’ll mark the D chord with the Roman numeral V, and add a “7” to it to indicate that it’s a 7 chord.

The reason we want to look at the Roman numerals and figure out the chord pattern that way, is because in the next video we’ll be talking about changing keys.

Marches typically involve changing keys, and if you listen to the recordings of The Yellow Rose of Texas by Elvis and Mitch Miller above, you might notice that they do, in fact, change keys about halfway through.

Changing keys just means that they start in a certain key, such as G major – but later on, the key signature changes and suddenly the song is written in a whole new key.

I hope you’ve enjoyed this lesson on The Yellow Rose of Texas! It’s fun to learn folk tunes from all around the world (even though I clearly have a Canadian bias). Next time we will explore a new country!